Snowman is known for simple games that allow the player to simply relax, chill out, and enjoy the highly stylized landscapes and lo-fi soundscapes, painting the gaming experience as true escapism into somethin surreal yet grounded. These games have been making the move from mobile to console recently, introducing the simple concepts onto the big screen. They made Alto’s Adventure, which is a fantastic snowboarding endless runner with an extremely simply control scheme that’s fun to master on its procedurally generated slopes. Their latest to grace consoles is Skate City, coming down off the mountain and taking to the streets—chill beats to skate to.

Originally released on Apple Arcade in 2019, Skate City is another relatively simple concept. It’s a side-scroller with a very muted art style. Control wise, it takes some clear inspiration from the Skate series, almost landing in a middle ground between Skate and OlliOlli. Each stick is used to perform tricks, while the shoulder buttons can assist in grinds, spins, and manuals. Holding or mashing X makes your skater move forward. Skate City is grounded in a realism of street skating, so you won’t find any big ramps or vert pipes here. You aren’t about to pull off massive air or endlessly long grinds like in Tony Hawk’s. The combos here are short and sweet, and as such, the multiplier only goes up to a max of four so you don’t have to feel like you need to chain them together.

Skate City has three levels to choose from, which you can either skate in endlessly (the level loops) or try to master a series of 21 specific curated challenges such as landing specific tricks or earning points while outrunning the police. The endless mode also has a big task list to tackle if you absolutely need the chase of something to keep you coming back. Completing these assorted challenges rewards points that can be spent on new looks and upgrades for your skater. However, the available rewards aren’t all that enticing. The added cosmetic options don’t stand out much in Skate City’s particular style, and as I poured money into upgrading my stats, I could only notice the smallest of differences in things like Speed, Pop, Balance, and Spin.

When played for more than an hour or two at a time, Skate City begins to introduce a lot of repetition. This is, after all, an Apple Arcade game that was designed to be played in short spurts on your phone. But if you pace yourself, use Skate City as a bit of downtime between other things, it becomes a zen experience that can help erase the pressures of a long day or ease tensions after heated multiplayer matches in other games.

Perhaps the most notable feature in Skate City that helps it capture that zen experience is its original lo-fi soundtrack, which can actually help with getting into the right groove and mood needed to start diving into Skate City’s more nuanced concepts. Along with the simple stylized visuals that betray Skate City’s mobile origins, the soundtrack is a defining aspect of the game and does a lot in terms of tying it back to Snowman’s previous work. 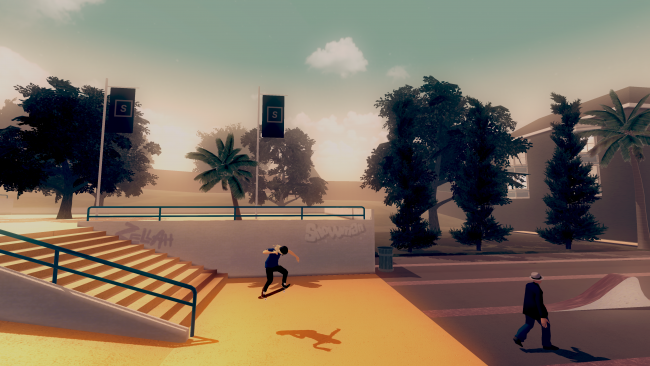 And it’s a good thing the music and muted visuals are there to chill you out, because some of Skate City’s challenges can get rather frustrating with the game’s imprecise controls. Even simple “perform this trick” challenges became tests of if the inputs on certain tricks would even register properly. There’s also some difficulty within its side-scrolling presentation, which can make it unclear when you are setting yourself up to grind a ledge or rail. Your skater will move in and out of the environment in context with whatever grindable object is present, which could be rather odd feeling at times, especially when an object looked grindable but wasn’t. I had to drastically unlearn controls form other popular skateboarding games in order to make room for how Skate City wanted me to play.

Fortunately Skate City leans on a fast retry system, so these issues don’t stagnate for too long. But for a game as simple on the surface as this, it was rather frustrating to run into problems like this. Those lo-fi beats can only chill me out so much before I’m ready to toss the controller after the game doesn’t register the right type of grind for the tenth time in a row. There are also some odd issues wiuth challenge completions either not registering or registering incorrectly. Numerous racing challenges that I had without a doubt lost gave me the completion, while other challenges I was certain I had nailed would give me no progression at all.

While I normally don’t specifically call out Trophies in a review, Skate City does not include a Platinum, if that gives you some idea of its scope. Players will simply need to complete all 63 challenges with at least one star (21 challenges each in LA, Osls, and Barcelona) as well as polishing off all of the free-skate goals for each level. Along the way it asks you to fall 500 times, which will no doubt happen naturally along the way.

It also includes a pretty cool suite of in-game recording tools that let you make the perfect skate video of your tricks. Though the game is played from a side-scrolling angle, you can circle the camera around your skater, speed up and slow down time, and use a few different effects to capture that perfect short video of your favorite combos.

Curiously, this console release of Skate City doesn’t even include everything from the mobile game. The Miami level, which was added to the mobile version last year, is nowhere to be found, and the Pro Skate mode introduced last month isn’t there either. Hopefully these and future updates are added later, because at this point the console port of a mobile game having even less content than the mobile version feels a bit backwards, particularly when that console version costs $15 and the mobile version is free (with an Apple Arcade subscription).

Skate City is buoyed up by its excellent and mellow lo-fi soundtrack, a veritable repository of chill beats to skate to. This defining aspect helps elevate a simple concept to put you in the right mood to engage with it. While the visuals are nothing to write home about and the finnicky controls can sometimes cause frustration, there’s still something special about chilling out with a 20 minute skate session after a hard day’s work, and discovering yet another great lo-fi tune. However it should have launched for consoles with at least all of the content and modes from the mobile version, if not more for its bigger platform debut. While Skate City is a relatively engaging and mellow experience overall, it’s one I have a hard time recommending on console at its new premium asking price.

Waluigi is having a great week