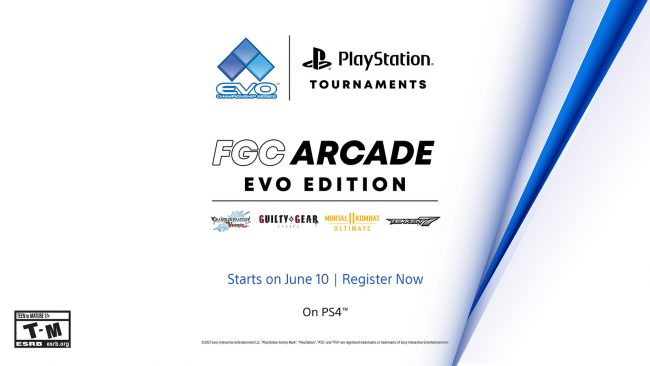 As part of the new Evo Community Series, PlayStation will be hosting three online community tournaments for various fighting games on the PlayStation 4. Starting from June 10, there will be three tournaments of varying prize pools and featured titles. This includes FGC Arcade: Evo Edition, Evo 2021 Online Warm-up, and Evo 2021 Online Side Tournaments. All events will include cash prizes and will be open-format, meaning anyone 18+ with an active PS Plus membership from an eligible country will be able to apply.

The first event will be the FGC Arcade: Evo Edition, held from June 10 to June 22, 2021. This event will be for participants in the North America and Europe regions and will feature a $20,000 global prize pool. Included titles are Granblue Fantasy: Versus, Guilty Gear Strive, Mortal Kombat 11 Ultimate, and Tekken 7. The pro-am tournament is “celebrating newcomers and underdogs”, and will include round table interviews from prominent voices in the fighting game community.

Second in line is Evo 2021 Online Warm-up, held from June 26 to July 13, 2021. Players from North America, Europe, Latin America, Middle East, and Asia will be able to compete in this event, with a $19,000 prize pool. Featured titles include Guilty Gear Strive, Mortal Kombat 11 Ultimate, Street Fighter V: Champion Edition, and Tekken 7. This event will be for those who wish to prepare for Evo 2021 Online by getting a few wins under their belt, as well as some decent cash. Additionally, participants will receive special avatars and themes as rewards.

Finally, there are the Evo 2021 Online Side Tournaments. PlayStation will hold the event from July 8 to August 3, 2021, and include players from North America, Europe, Latin America, Middle East, and Asia. This is a big one, as the prize pool is $35,000 and features a wide variety of fighting games: BlazBlue: Cross Tag Battle, Dragon Ball FighterZ, Granblue Fantasy: Versus, Mobile Suit Gundam: Extreme Vs. Maxi Boost ON, Skullgirls 2nd Encore, Soulcalibur VI, and Under Night In-Birth Exe:Late[cl-r].

The Evo Community Series tournaments all lead up to the Evo 2021 Online tournament planned in August. Players will be able to register for the community series via the PlayStation Competiton Center or Events tab on PS4 consoles. PlayStation acquired the fighting game tournament series back in March 2021, in a joint agreement with esports venture RTS. Evo 2020 was canceled after the former CEO and co-founder Joey Cuellar was accused of sexual misconduct involving minors.

Sea Shanties Finally Come to FUSER With the Addition of Wellerman, Free For All Players

GRID Legends Release Date and Gameplay To Be Revealed Tomorrow

By World Games14 hours ago0
PS4