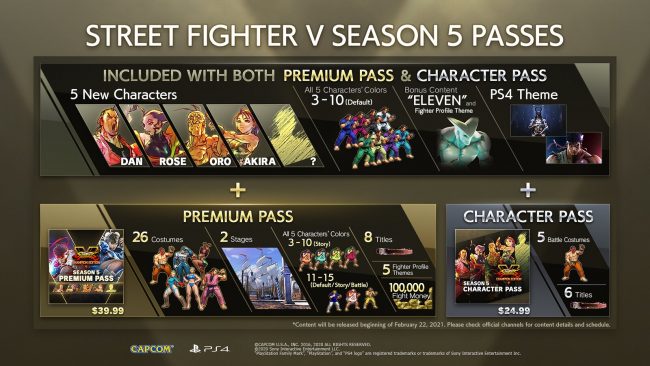 Season V will be the final season for Street Fighter V and Capcom has revealed it will begin with the Winter Update. The season was originally due to kickoff at the end of 2020. To make up for the delay, the Winter Update will include a bonus character for Season 5 Pass owners. Now the season will begin on February 22, just a few days after the game celebrates its fifth birthday.

Dan Hibiki was the character originally due to release with the update. He returns with a mix of familiar and new moves and mechanics. His special moves include the Gadoken fireball and the Koryuken uppercut, while he can still close the gap between fighters with his Dankukyaku kicks. His new moves include a multi-hit punching move known as the Danretsuken that can knock opponents flying, while the EX version sends them higher into the air. His V-Trigger I activates his massive Haoh Gadoken fireball that can be charged up. Finally, his V-Trigger II is allocated to fireball and uppercut special attacks.

Season 5 Character Pass or Premium Pass owners will also have access to bonus character Eleven, a prototype of Twelve who appeared in Street Fighter III. He doesn’t come with his own moveset; instead he’s a mimic character and will randomly transfer into any character the player owns. He’ll have his own color scheme, a random V-Skill, and a random V-Trigger.

Also releasing during the final season is The Grid Alternative training stage, the Battle Balance Update that includes changes for all 40 characters, and the new V-Shift defensive mechanic. This gives players a completely backdash that slows down time for a short period, but only if timed perfectly. The move is completely invincible, including against throws. Players can activate the move at any point during the match for the lowly cost of one bar of V-Gauge, but if it’s timed perfectly, they can regain half a bar. The V-Shift Break is a follow up attack that can then be used so fighter moves forward, helping to change the momentum of battle.

All of the above will be arriving on February 22. While Rose isn’t due to make her debut until the spring, Capcom also revealed her move set. One of her new moves is the Soul Bind anti-air move. Here she uses her scarf to disrupt jumping opponent. She also has the new ability to perform her Soul Spark projectile in the air. Her V-Skill I is also new; Soul Fortune can summon tarot cards that apply benefits to her and penalties to her opponents. Her V-Skill II is the returning Soul Satellite, and her V-Trigger II is Street Fighter Alpha‘s Soul Illusion. The final new move is her V-Trigger I, a teleportation move known as Soul Dimension.

Those who haven’t tried the game yet will be able to do so through a free trial that’s available until February 24. The trial includes all of the characters from the main game as well as Seasons 1-4. Of course, you may already have the game as part of your PS Plus Instant Games Collection, or you can play the game through PlayStation Now.