The year is 2035. For some reason, humanity has created a WALL-E-esque line of robots that mimic their needs as closely as possible. This means the robots can also think, and eventually they get sick of being inferior to humans. They build a spaceship and leave Earth behind, roaming the galaxy in search of a new home. The result is The Colonists, a settlement building game that’s been inspired by titles like The Settlers and Anno. The title has been on Steam for over two years, but has just made the leap to consoles.

Players begin by taking on a series of individual campaign missions, each of which has a set goal to achieve. The first of those is a tutorial where players are guided through every step of building a new colony and all of the mechanics are introduced at a gentle pace. While the spaceship lands with a small supply of logs to build simple structures and the energy cells the robots need to perform certain tasks, this doesn’t last for long. They need to harvest the planet’s natural resources starting with logs and stone, draw basic paths and roads between buildings, build residences to create more energy cells, drill down for water, and even set up farming and food production.

The Colonists Review – Not as Simple as it Looks

The second mission is where players are let loose to create their own colonies with just a handful of reminders and a list of helpful hints to point them in the right direction. Although there will be a lot of trial and error, each new function can be discovered at the player’s own pace. Things become more complicated as new technologies have to be researched so new buildings can be created, others can be levelled up, and basic actions can become more efficient. There are expeditions to be plotted to discover new lands and more much-needed resources. Boats and trains allow players to reach previously inaccessible areas.

Beyond the second mission, the remaining 12 missions are split into separate economy and military tracks. The economy line lets players create settlements without distraction, their only aim being to create the structure that marks the end of the mission. Every mission starts over afresh as robots colonize a new land, so those wanting to keep building on the same colony might be disappointed. The only source of irritation is that no research progress is saved between missions—everything has to be researched over and over again. 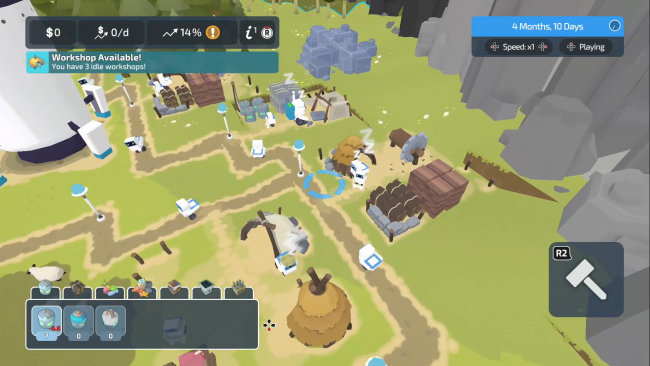 The military missions have a different objective where the aim is to take over the AI opponent’s land and capture their spaceship. There’s no war units to control, nor does the game come anywhere close to feeling like tower defense despite the need to upgrade and arm watchtowers. Instead, the focus is on expanding territory quickly, researching new technologies as soon as possible, upgrading structures and clearing enemy territory. Speed is essential.

The Colonists appears to be deceptively simple on the surface. Players could just plonk down buildings wherever they felt like it and be done with it if necessary. They don’t have to worry about finances, only the resources that can be found across the map. Once buildings are running, the robots control the rest. The economic missions have no survival aspect to conquer. The only potential issue is when resources clog up the roads. The thing is, though, robots have always been built to make tasks more efficient and that’s the real aim of this game too. Each mission has gold, silver and bronze medals to represent how quickly players achieved their objective. To get the gold medal, there needs to be meticulous planning.

The Colonists Review – Plenty of Information to Find

There’s a lot more information to find for players that want to be as efficient as possible. Lots of monitors and trackers tell them how well their colony is operating. There’s a production and demand table that shows how well demand is being met and which resources are being overstocked. How well buildings are being utilized and how long materials are in transit can also affect the efficiency of a colony. While individual robots can’t be micromanaged, each of the structures players build can be tweaked and the speed of the game can be controlled.

The most experienced players will pause the game to try different layouts before choosing the most suitable location for buildings. Trees and minerals can be prioritized for logging and mining. Construction of new buildings can be paused if they’re draining too many resources. Existing buildings can be set to import/export goods to specific places so materials aren’t crossing the entire map. They can also be prioritized so resources go to them first. Road checkpoints be gated to only allow certain good through them, as can harbors. Once players start exploring the many options the game offers, it becomes a speedrunner’s paradise.

Once the campaign is over, there are four different challenges for speedrunners to conquer and those time limits are extremely stringent. Trying to edge days off your time can become an obsession. Those who prefer a more sedate pace will instead enjoy the game’s sandbox mode where a colony can be created without any time limits or mission constraints. Whichever your preferred playstyle, there is hours of entertainment here as the game is an engrossing time sink that can make hours mysteriously disappear.

One of the worries about a city-building game ported from PC is the controls, but there’s very few concerns here. Most of the game’s functions have been transferred to a radial menu instead of the tabs found in the PC version. Everything here can be operated between the shoulder and trigger buttons while the camera is easily moved around with the right stick. The radial menu can sometimes be a bit finickity with players making the wrong selection by letting go of the joystick a split second too early, but it’s the only issue.

The Colonists Review – A Convincing Transfer from PC

While the game brought over many features from the PC version, there are some that are missing. Those expecting a map editor will be disappointed to find it absent, as are the procedurally generated maps that offer a lot of replayability for PC players. The latter means there’s no Frontier mode either for players to compete against each other. Despite this, The Colonists offers hours of entertainment for those wanting a relaxing, simplified experience and those wanting to speed run their way through all manner of variables to a perfect colony.