Supermassive Games just recently pulled back the curtain on the third entry in its Dark Pictures Anthology, but it saved some surprises for Geoff Keighley’s Summer Game Fest. During the live stream, a trailer showcased more of the tension and horrors awaiting a military group that gets trapped in an underground temple with a nest of monsters hungry for blood.

Up until this point, we didn’t have a release date, let alone any idea what these monsters even looked like in House of Ashes. Supermassive unveiled the horrifying creatures at the end of the trailer above, but not before revealing an October 22 release date alongside “The Pazuzu” collector’s edition (pictured below), which offers a figurine of the creepy creature (10 cm), exclusive art print, stickers of the cast, eclipse pin, collector’s box, and more. The Pazuzu edition is a Bandai Namco store exclusive. 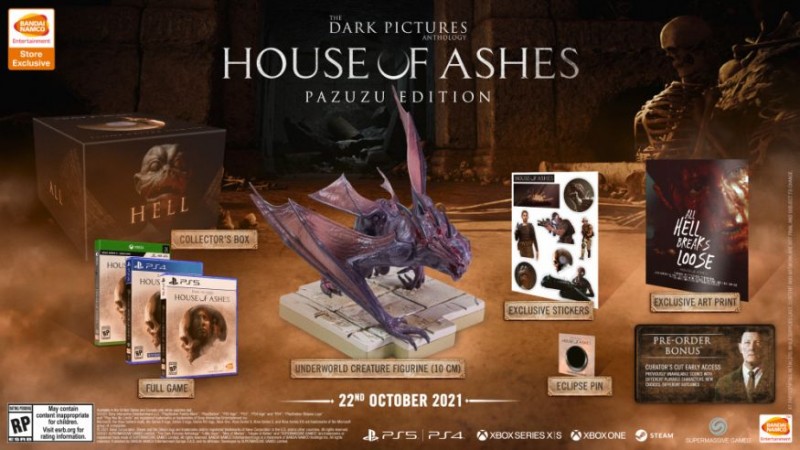 When we talked to director Will Doyle, he said: “The creatures in House of Ashes are some of the most complicated we’ve ever made. But through hand animation and motion capture, we’ve created a monster that is very believable, very threatening, and very dangerous.”

Finally seeing one up close, it certainly looks like a horrifying menace that I wouldn’t want to be trapped in an enclosed space with, but I’m sure I’ll have my fun outsmarting and besting them.

House of Ashes marks the first time enhanced versions will be available for the new-gen systems (PS5, Xbox Series X/S). It is also coming to PS4, Xbox One, and PC.

For more on House of Ashes, we recently broke down everything you need to know about the next entry in The Dark Pictures Anthology.