New content for The Division 2 was due to cease with the release of Title Update 12. However, Ubisoft did a u-turn when they realised many players weren’t prepared for the game’s content to end. Not only have they revealed just how popular the game has been during the last season, they’ve confirmed that the new content will include a new game mode. Those who missed out on rewards from previous seasons can also make use of the season re-runs that begin tomorrow.

Last month the publisher promised they would be releasing additional content this year and they were currently in the early stages of development. The main feature of that new content is a game mode that’s “entirely new to the franchise.”  Ubisoft Massive and Ubisoft Bucharest are also looking into new ways for agents to progress that introduce more “variety and viability.” Details are scarce right now, but with development due to take several months, we can expect for news closer to its release window.

In the meantime, the four previous seasons of content will be re-run. Starting tomorrow, March 9, Season 5 will begin and will be a re-run of Season 1: Shadow Tide. Leagues and Global events will be available, and it’s a perfect opportunity to pick up any of the season’s rewards you may have missed the first time. There won’t just be old events though, as new Apparel Events will be introduced throughout too.

While the game didn’t meet Ubisoft’s expectations initially, last year has more than made up for this. The franchise has now accumulated more than 40 million unique players and the highest month of activity occurred in March 2020 with the release of Warlords of New York. More stats are available in the infographic below, including some epic performances from a couple of agents: 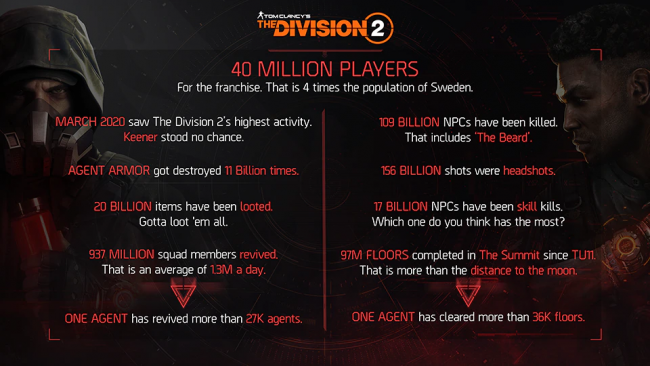 The Division 2‘s new content is due for release in the latter part of 2021 “at the earliest.”

The post The Division 2 is Getting a New Game Mode Later This Year, Previous Seasons Will Run Again appeared first on PlayStation LifeStyle.

How To Play Call of Duty: Modern Warfare 2 Campaign Early

Disney Marvel Showcase Date and Time Announced: What Games Will Be Shown?