0
Mass Effect Legendary Edition is out and it brings a litany of changes to the series — some announced and some kept secret until it was in the hands of fans — and players are still discovering more.

Some come as big surprises, such as a fix to a decade-old bug, while others serve as reminders to just how much time has passed since the release of the original trilogy of Mass Effect games. IGN has rounded up some of the biggest, best, well-hidden, and most-surprising changes to BioWare’s sci-fi trilogy.

Anyone familiar with the original Mass Effect 3 release knows that it answered a question asked by many a Tali fan: what does Tali look like under her quarian armor? If you romance Tali in Mass Effect 3, this relationship leads to a scene in which Commander Shepard looks at a photograph of an unmasked Tali and…saw what was a photoshopped image of Miss England ’05 winner, Hammasa Kohistani.

Sure, BioWare did add some alien features to Kohistani’s face in the photo, but at the end of the day, it was still just a photo of a human. It’s safe to say BioWare took that criticism to heart because in the Legendary Edition of Mass Effect 3, Tali’s face is now seemingly an original piece of art and not a photoshop of a pageant winner. You can check out Tali’s new look below, courtesy of MaxGoods on Reddit. 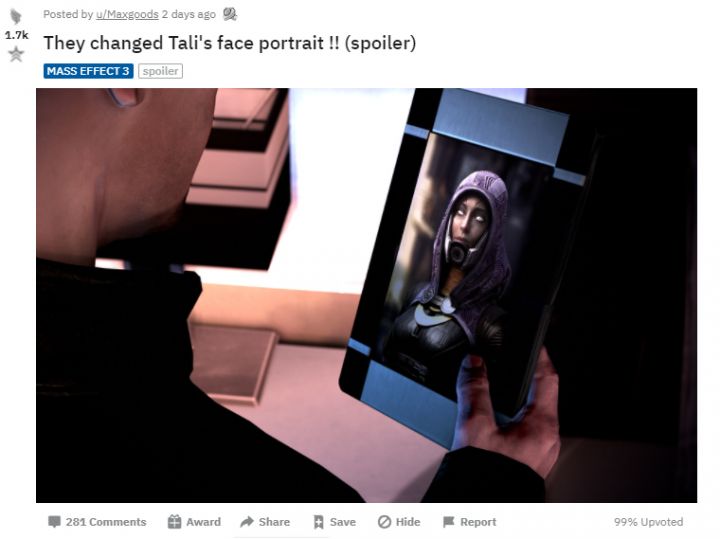 Redditor Superspicycurry37 said “this is the ONE thing I wanted them to change if they were going to change nothing else,” and that they’re “glad it was this.” Redditor Max_Crultak26, however, said “in my head-canon, some quarians are purple or pale red with lines, and others like Tali are purple with freckles (and tree-like lines) but still, the image is cool.”

Pluto is a hotly-debated topic in the world of science. Is it a planet? Is it not a planet? Mass Effect 2 doesn’t care because regardless of its status in our solar system, it’s something in space that can be scanned. What’s interesting about scanning the planet in Mass Effect 2 now is that in the Legendary Edition of the game, Pluto’s texture has been updated to match the most recent picture of Pluto from 2015. 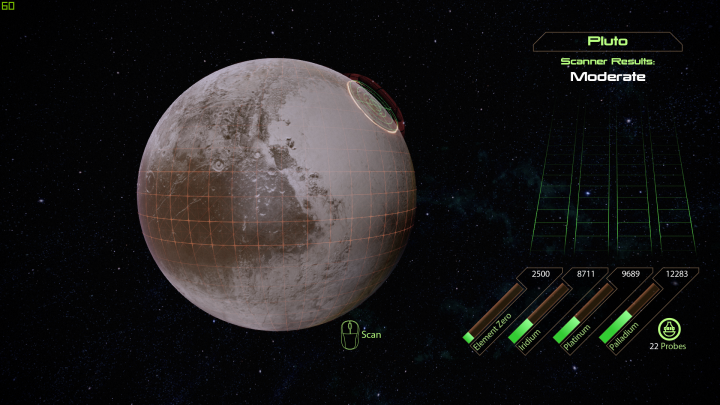 The photo above is what Pluto looks like in the Legendary Edition of Mass Effect 2 and it comes by way of Redditor Kunven. It’s a small change, but a welcome one as indicated by some of the replies to Kunven’s post on the Mass Effect subreddit. Redditor Silent_Shadow05 said they “appreciate these small details” and that they believe “BioWare really went above and beyond for this remaster.”

In the original release of Mass Effect, space pirate Elanos Haliat was a human and that didn’t really make much sense. Eurogamer, which originally reported on this change, pointed out how weird it was that Elanos was human in the original release of the game. As Eurogamer’s report notes, Elanos hates humans, he wants to attack a human colony, and other Terminus races rally behind him as their leader. Doesn’t sound very human-like, eh? That’s because Elanos’ status as a human was a bug in the original game.

That’s been fixed in the Legendary Edition of Mass Effect, however, as now Elanos appears as a Turian in the game, which makes a lot more sense. Redditor DocD173 posted a side-by-side of the change, which you can check out below. 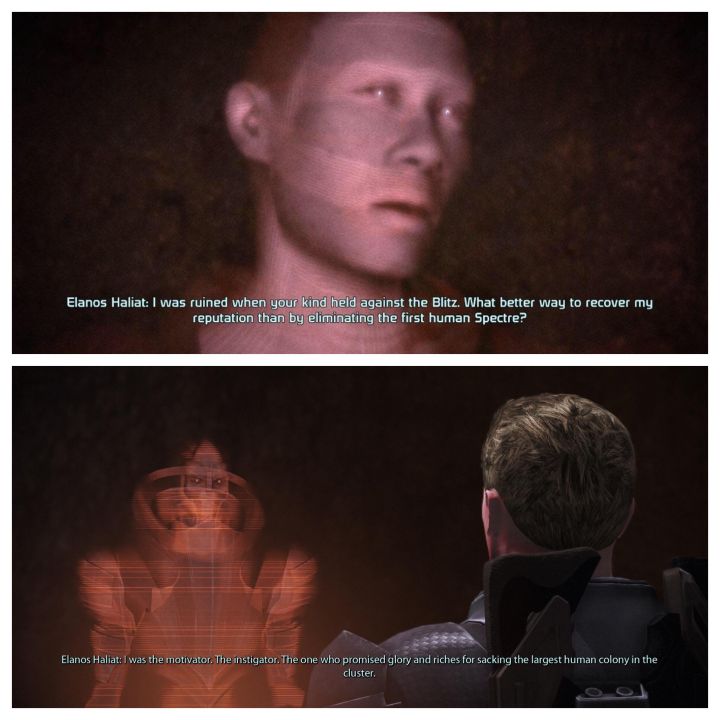 “Was always so confused that the leader of the Terminus systems responsible for the Skyllian Blitz was a human,” DocD173 said on the game’s subreddit. “This is such a small but welcome change in ME:LE. Was not expecting these side missions to get this kind of love.”

Lovers of Liara T’Soni: Check out Her Doctorate Degree in Photo Mode

If you’re romantically interested in Liara, or even just interested in this character platonically, why not get to know a little more about her educational background? Thanks to the newly-included Photo Mode in Mass Effect: Legendary Edition, players can now view Liara’s doctorate degree, as discovered by Redditor TannenFalconwing. 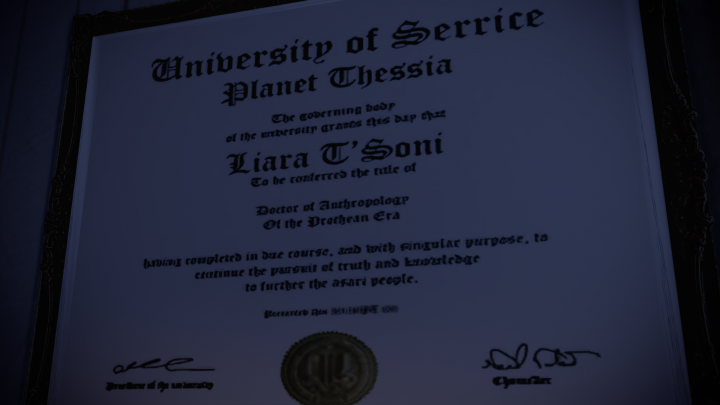 As you can see, this is Liara’s doctorate degree from the University of Serrice on Planet Thessia. Who knows what else the newly-included photo mode could help players discover in Mass Effect? TannenFalconwing posted what they believe to be a transcription of what the degree says, too, alongside their discovery:

Beyond cool discoveries like this, the inclusion of photo mode is a welcome addition for fans of the series, both new and old. For some, it’s an opportunity to take hilarious photos where Commander Shephard is awkwardly standing behind beloved characters. For others, the new photo mode is a great tool for those who wish to showcase their love of the series’ characters, locales, and more.

A quick stroll through the Mass Effect subreddit reveals dozens of posts where players are praising BioWare for adding a photo mode to the game. Redditor Demiurge93 said “adding photo mode was the best decision BioWare ever made” and that they “hope they keep it for future ME/DA titles.” Another Redditor, ShadowVia, said “photo mode is a game changer,” while other users, like Beanjameen, are astonished at the photos they’re able to capture because of the game’s photo mode, such as the one they took below. 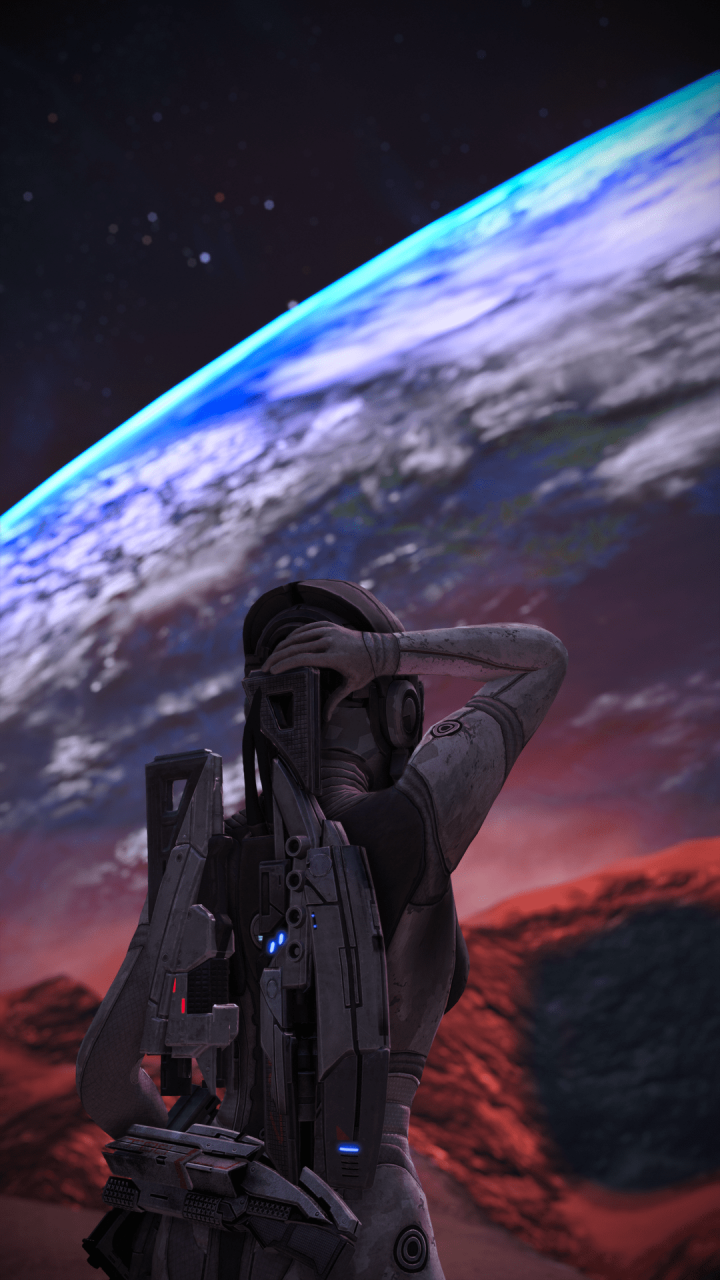 It’s well-documented just how poorly the Mako handled in Mass Effect and while it’s still not a perfect, easy-to-handle, all-terrain space vehicle, the team deserves credit for making the new Mako handle much better. It’s impossible to deny that it controls much better.

However, if you want to drive the original Mako around, flaws and all, you’re free to do that by simply switching to the original version in the game’s settings, as noted by a PC Gamer report.

Be it nostalgia or masochism or something else entirely, this is a judgement-free zone: use that original Mako if you want to — we’re just here to let you know it’s possible to switch back and forth between the old and the revamped version.

Even The Latest Mass Effect Legendary Edition Update Made Some Changes

As noted by the examples listed above, there are some previously-announced changes and secret changes to be found in Mass Effect Legendary Edition and at least for now, it seems more could be on the way if the latest update for the game is any indication.

As noted by IGN’s coverage of the update, Mass Effect 2 players will be able to enjoy “improved lighting and shadows” in the game’s cinematics and “minor visual, rendering and VFX improvements” as well. Other things like achievements were fixed with this update too.

If all of these discovered changes are anything to go off of, it seems there might be even more hidden within Mass Effect: Legendary Edition. Have you seen some changes we didn’t catch here? Drop a comment and let us know. In the meantime, be sure to read about how the game’s project director says Mass Effect 3’s multiplayer could return and then check out IGN’s official Mass Effect wiki guide for tips and tricks, walkthroughs, how-to guides, and more.

Game Scoop! 659: This Changes Everything