One of the first things that you’ll notice about The Wild at Heart is how utterly beautiful it is. The art style is full of color and wonderful hand drawn details that mean that it wouldn’t look out of place in an illustration from a children’s novel. This isn’t a game that favors style over substance though, it’s a brilliantly clever little puzzle game where you’ll also get to amass an army of adorable forest critters.

The game begins with a young boy called Wake completing the final stages of a plan that has clearly been in the making for a while; running away from home. He gathers up all the things he thinks might be useful, such as a peanut butter and jelly sandwich as well as a handheld gaming console. After that he heads off to the woods where he is supposed to meet his best friend, Kirby, so that they can both leave their troubled childhoods behind.

However, things don’t go quite to plan. It turns out that forests are very easy places to get lost in. Wake ends up in a very deep part of the woods where he discovers an eclectic group of people who are trying to contain an ancient evil called The Never. These Guardians have been around for a while but need Wake’s help to rescue some of their lost friends.

You won’t just be exploring the deep wood on your own though. You befriend some adorable forest creatures called spritelings. These critters follow you around and can do all sorts of things like build bridges, move massive stones out of your way, as well as fighting against hostile enemies.

There are different types of spritelings that will be useful in different situations and it’s really quick and easy to switch between them. Your progress through the woods will be blocked unless you have the right type of spriteling, for example, you’ll need Shiverlings in order to create ice bridges for you to cross. There are lots of really clever and interesting puzzles where you’ll need to figure out the best way to use your little army to unlock the path forward.

Things get really fun when Wake gets reunited with his friend Kirby. You’ll be able to switch between the two of them and have them move around the forest separately. Kirby is able to squeeze through small pipes and access areas that Wake can’t reach, whereas Wake can use his homemade vacuum device to activate wind spinners and suck things towards himself. The puzzles start out fairly simple but then gradually become more and more complicated as the game progresses.

You’ll find yourself revisiting some areas but it never starts to feel repetitive. As you gain access to different types of spritelings and increase the number that can follow you around, you’ll uncover new pathways and hidden secrets. It’s a real joy to explore all the different areas of the forest and try to find every last hidden item.

As you’re exploring day will gradually turn into night. In the dark the forest changes and becomes a much more dangerous place. Shadowy Never creatures will come out and start to attack you and your little spritelings so it’s best to retreat to a camp and safely wait out the night.

At times it does feel like night comes around a bit too quickly. It can be a bit frustrating to almost make your way through a new area but instead have to rush back to the safety of a camp. On the other hand there are a lot of useful things to do at your campsites. You’ll be able to craft new items using the scrap you’ve found as well as hatch new spritelings to join you. 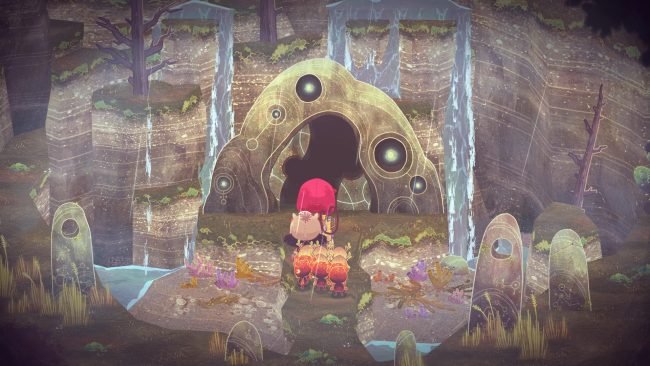 Camping for the night has the added benefit of not only restoring you back to full health but also occasionally letting you see into Wake and Kirby’s dreams. These short dream sequences will show you more about their life before the deep woods. It helps you to understand more about who they are, as well as the problems that they are running away from. While they are only short scenes they do a great job at making you empathize with the two protagonists.

The forest isn’t just dangerous at night. During the day there are plenty of creatures roaming around, ready to take a bite out of you or your little spritelings. The combat reminds me a bit of Little King’s Story, where the protagonist needs to stay out of the way, and instead you send out your army to fight for you. As long as you have enough spritelings to hand you’ll be able to take out giant toads and creepy slime blobs with ease.

When you’re not fighting off the various forest creatures or helping the guardians overcome the Never there are plenty of other things to distract you. Whether it’s completing bounties for a youthful looking warrior or rescuing cats for a crazy cat lady there’s plenty of reasons to go back into the forest and explore every inch of its wonderful environment.

The Wild at Heart tells a sweet story about magic, childhood, and friendship. With its enchanting music and gorgeous environments to explore, it’s a beautiful adventure that will keep you captivated until the end. Having the spritelings to solve puzzles and fight for you is a really fun gameplay mechanic and adds lots of interesting dynamics to the puzzles. The Wild at Heart has plenty of secrets to discover and it’s a real joy to try to uncover them all.

The Wild at Heart PS4 review code provided by publisher. Version 1.03 reviewed on a PlayStation 5. For more information, please read our Review Policy.

The post The Wild at Heart Review – Walk on the Wild Side (PS4) appeared first on PlayStation LifeStyle.