Update: We’ve got a new tweet on the Maneater Twitter account as the ARG for the Maneater DLC continues. It seems like is Trip Westhaven, the narrator and producer of the fictional “Maneater” nature TV show/mockumentary that the Maneater game parodies. He’s released a new video (which is really just audio) on the Maneater account, saying that the program was cancelled due to “explicit depictions of actual death.” He says he’s broadcasting online to escape the censorship of the network.

Hopefully all will be revealed soon, but it sure seems like Trip Westhaven is getting ready to tell us what’s coming next for Maneater.

Original: Earlier this year, Tripwire games confirmed in an AMA (ask me anything) on Reddit that DLC for the shark RPG (ShaRkPG) Maneater was in the works. The developer stopped short of confirming what might be coming, only saying that it was coming “soon.” Recently the official Twitter account for the game has started some rather bizarre teases involving being “hacked” and some weird mashup images of animals edited together. And these Maneater DLC teases are getting progressively more weird.

Nothing too strange about that, except that it started getting players hyped up for an incoming announcement. Later that day, however, a strange message was posted:

The upside-down message reads “I have taken back control from the overlords—prepare to be liberated, audience,” and is signed by ░T░. That… doesn’t so far compute with what Maneater is. Have the sharks become hackers now? But it doesn’t end there.

Again, on the same day, another image was posted, saying “Fishy,” and signed by the same person.

The image appears to confirm this is all related to Maneater. It seems to be part of a conspiracy theory research board, with “City of Port Clovis” (the location the game takes place in) circled and arrows leading out to “Mayor Wade Hibbard” and “Steve Trag…” There is also a stained sticky note depicting elements going into a fish, and the phrase “Nuclear!?” written. Port Clovis wasn’t exactly the best at keeping its waters clean and pristine, and one portion even featured a nuclear waste site. Are the fish mutating?

It reads “REDACTED told me truth is a lie.” Again signed by our favorite ░T░.  And then another cryptic tweet with a QR code.

It reads “photo synthesis” and the QR code takes you to this link, featuring a number of images of hybrid animals; a elephant with a duck bill, turtle with the head and neck of a giraffe, duck with a horse head, an absolutely terrifying seagull shark, and an equally as terrifying horse shark. 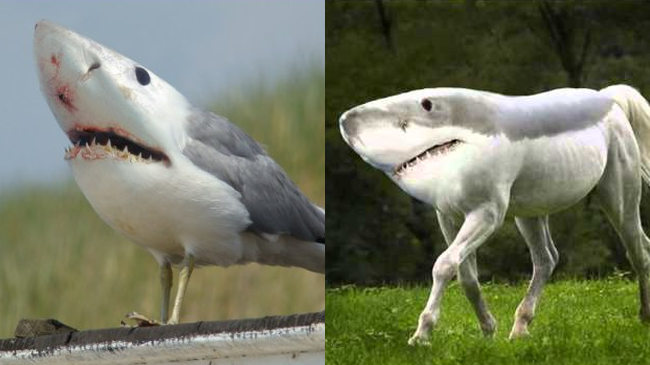 That’s everything so far. The mysterious ░T░ hasn’t posted anything yet today, but it looks like whatever’s next for Maneater is about to take a turn for the weird. Will we get to play as sharks spliced with other animals, taking the chaos of the seas to the surface in a whole new way? Flying sharks? Majestic running sharks? No matter what, it looks like the plans for Maneater DLC are probably bit bigger than just a few new evolutions. No we eagerly await our “hacker” friend’s next missive to get more clues.

What do you think of the Maneater DLC teases? Let us know your theories in the comments below, and ░T░, if you’re reading this, we’d love to know what you’re up to.

The post These Maneater DLC Teases Are Starting to Get… Weird, Are the Sharks Getting Spliced With Other Animals? (Update) appeared first on PlayStation LifeStyle.

PSA: PlayStation Summer Sale 2022 Will End in a Week

How to Switch Between Party and Game Chat on PS5