Pokemon has been around for 25 years now, and there are numerous ways to enjoy the well-loved franchise for its 25th Anniversary. The core RPGs where it all started, the massively popular trading card game, the countless spin-offs like the upcoming New Pokemon Snap, and even a few board games. However, there is a truly cooperative group activity perfect for a nostalgic crew of Dungeons & Dragons fans who want to play Pokemon while also being social (or, socially distant): Pokemon 5e, a set of unofficial tabletop RPG rules built just for Pokemon.

Though I have been playing with Dungeons & Dragons’ official 5th edition rule set regularly for five years, and always loved the idea of Pokemon D&D, my group had never quite figured out how to incorporate Pokemon ourselves. To be honest, translating the Pokemon video game into a tabletop-friendly format is a daunting task, and none of us wanted to commit to the legwork behind it. Hundreds of Pokemon, moves, abilities, items — it’s a lot.

Luckily, around two years ago, our Dungeon Master found a homebrew Pokemon handbook and monster manual online called Pokemon 5e, and it was exactly what we were looking for: The freedom of the D&D 5th Edition ruleset, but with Pokemon and the trainers that caught them featured front and center. For the D&D fans reading this, it basically makes you a modified version of the Ranger’s Beast Master subclass (except actually good) with multiple beasts that do 99% of the fighting. But Pokemon 5e doesn’t stop there: every Pokemon, move, item, held item, etc. are all included and adapted for optimized D&D 5th edition-style play. There is even a price sheet for stores and specific catching mechanics!

As seasoned D&D players, we picked up the fan-made ruleset intuitively. I could write a whole separate article about how much cathartic fun playing Pokemon 5e with some of my closest friends online over Roll20 brought me in a time I couldn’t see my usual local D&D group or play video games due to an injury, but trust me when I say we had a blast. I even DM’d my first mini-campaign where all of my stupid amount of random Pokemon knowledge became useful.

Why Pokemon With a Dungeons & Dragons Ruleset?

None of that would have been possible without the person behind Pokemon 5e, known online as JOEtheDM. Like me, Joe had begun his journey into tabletop gaming with Dungeons & Dragons 5th edition a few years ago. After playing his first game, he listened to tabletop-centric podcasts and tried out additional TRPG rulesets like Pathfinder and FATE. As a Pokemon fan, he sought out a Pokemon tabletop game too, which led him to Pokemon Tabletop United, a fanmade set of rules completely separate from 5th Edition that didn’t quite scratch that itch.

“It was very much like the games, but in order to do that, 90% of the time you were just crunching numbers,” Joe explained. “For me it took the fun out of the flexibility of a system like [D&D] 5th Edition offered.”

Unsatisfied with what was available, Joe set out to create a system more like D&D 5th edition that emphasized cooperative player-versus-enemy gameplay. Unlike the Pokemon video games’ common one-on-one or two-on-two battles, Pokemon 5e is built to allow larger groups to battle all at once, cooperating with each other.

Plus, Joe thought of 5th Edition as a system that’s “almost like a gateway drug into Tabletop gaming for a lot of new players,” saying that he “wanted to pick a system more widely known and used because it was familiar, and most people would be able to modify the rules they already knew from playing 5e.” Joe also simply knew D&D 5th Edition best compared to other tabletop systems. It wouldn’t be as faithful to the video games as the Pokemon Tabletop United system, Joe conceded, but it would be easier to get into and more similar to the D&D experience, which emphasizes co-operative adventuring and narrative freedom.

He was right — as seasoned D&D players, we adapted to Pokemon 5e quite easily, and appreciated the extra freedom the system gave us to creatively battle with Pokemon in ways the video game never let us. As in D&D, just about anything we imagine can be done with Pokemon 5e!

For those unfamiliar with D&D, in a Pokemon 5e battle, players fight on a grid-like board similar to a setup you’d see in a tactics RPG, like Fire Emblem or, maybe more appropriately, Pokemon Conquest. Like a tactics video game, you generally fight with multiple allies at once, occasionally against entire hordes of enemies. In D&D, this might be a clan of goblins or kobolds, but in Pokemon 5e, it could be a group of wild, angry Beedril or a group of rival trainers. Each player takes turns strategically choosing where to put their Pokemon and what move to use — all the while working with their teammates for the best positioning against the opponent. Generally, dice rolls then decide if an attack has an effect and how much damage it does.

However, because it’s D&D, players have the choice to potentially befriend a Pokemon without battling, like Ash somehow accomplishes so often in the anime — probably with an incredibly high Animal Handling stat. Alternatively, the DM has the option of crafting unique encounters that don’t necessarily need to be solved by battling.

For example, a Pokemon in our game stealthily watched the group of players from the shadows. When a player finally noticed they were being watched, instead of attacking the Pokemon, he lured it out with a Rage Candy Bar – befriending what turned out to be a wild Espurr. Another time a player just hurled their Magikarp at the enemy, since it couldn’t move well on its own on land, and because a big fish would probably hurt whatever it fell on, right?

How Pokemon 5e Was Made

Translating each Pokemon’s stats from the core video games to 5th Edition was no easy task – the first iteration of the Pokemon 5e ruleset and monster manual, which included the first two generations of Pokemon, took nearly 200 hours to complete. Joe had to take each Pokemon’s traditional stats — HP, Attack, Defense, Special Attack, Special Defense, and Speed — and come up with a way to calculate their D&D stats of Strength, Dexterity, Constitution, Intellect, Wisdom, and Charisma, and it’s not as simple as saying “ATK=STR”.

“With Strength I take a little bit of Attack, a little bit of Defense, Special Attack, and crunch those numbers,” Joe says. “And these formulas that I’ve come up with will spit out a Strength score.”  Once Joe’s formulae have done their work, he’ll manually adjust each Pokemon based on what he feels is right for it. “For example, an Alakazam has a super high ‘Special Attack’, but I don’t see it as physically strong,” Joe says. 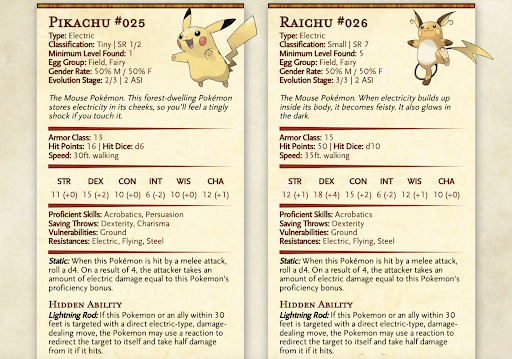 All of those stats are then calculated with another formula into what’s called a Species Rating (SR). SR can be directly compared to D&D’s CR, or “Challenge Rating”. At a glance, it tells you how strong that species of Pokemon is compared to all other species, ranging from the weak SR 1/8 (like a Rattata) to SR15, which would be a Legendary Pokemon. These SR ratings are occasionally manually adjusted as well – Joe said it takes some fine-tuning to make sure each Pokemon is at an SR level that feels right.

Sometimes, however, it’s a question of how to get tabletop rules to accommodate video game mechanics rather than vice versa. A Pokemon’s Moves work much more like they do in the video game than, say, D&D’s combat or spellcasting rules. Generally, each Pokemon can only know four moves at a time, and each move can only be used a certain number of times per day before needing to rest or visit a Pokemon Center – if a Pokemon runs out of its pool, all it can do is Struggle.

The action economy isn’t the only thing that needed tweaking, though – the Moves from the Pokemon games still need to be translated to work with dice rolls and D&D stats, and many of them simply can’t work the same way on the tabletop as they can in the digital world. “Swords Dance in this is nothing like it is in the games,” Joe said. “It’s my own personal flair on the move – which sometimes will gather some criticism.”

This criticism largely comes from Pokemon fans expecting mechanics to work as they do in the video games, but Joe is quick to point out that some things “have to be different just by the nature of Tabletop gaming.”

To be honest, my group did occasionally find changes we were disappointed by, but that’s almost to be expected when we were already so knowledgeable of competitive Pokemon strategies and wanted to pull off exactly the same tactics in Pokemon 5e. However, finding new ways of fighting together and devising our own combos became a whole new avenue of discovery and fun.

If there ever was something one of us particularly questioned, it could be brought up in the Pokemon 5e Discord server, where Joe and dozens of other passionate Pokemon 5e fans would answer promptly. Sometimes, after much deliberation and collaboration between players and Joe himself, Joe would decide to change something.

How to Play Pokemon 5e

If you want to check out Pokemon 5e for yourself, it’s completely free. Here’s what you need:

There are more resources on Pokemon5e.com, most of it contributed by passionate Pokemon 5e players who want to help build the community. My party primarily uses the companion app, Pokédex5E, which is basically a tool to build and keep track of Pokemon and their Moves. We also use the character sheets for our human player characters, and a few of the supplemental rules.

Now, with his formulae in place and fans volunteering to help with data entry, it takes Joe about 50 to 60 hours for each generation. Most recently, he released Gen 7, which includes all the Pokemon, items, moves, and abilities introduced in Pokemon Sun and Moon.

Fifty to 60 hours sounds like it could be completed in a few weeks, but Joe holds a full-time job in actuarial science, and has two small children at home. I asked him how he finds all the time to dedicate to Pokemon 5e, in making more modules, updating existing materials, and responding to the growing number of players so often.

“I think that with anything that you love to do, with anything you’re passionate about, you find the time,” Joe said, a bit exasperated. “The love for Pokemon; the love for tabletop gaming that I discovered—and the fact that it’s found success and people are enjoying it—I’ve just found the time. I don’t know how else to explain that.”

[poilib element=”accentDivider”]
Casey DeFreitas is an Editor at IGN who loves monster hunting, slaying, and catching. Catch her on Twitter @ShinyCaseyD.