If you can’t get enough of the Norse-themed games coming out lately, Norsfell Games has their take on the subject, called Tribes of Midgard. This isometric, 10-player survival co-op game promises epic boss fights, Roguelike mechanics, and a cel-shaded art style that you don’t see too often mixed with a Norse setting. Is this combination of genres worth your time and money? Find out in our Tribes of Midgard PS5 review.

The main draw of Tribes of Midgard is the Saga mode. This is an online, ten-player co-op mode which tasks players with defending a village located in the center of a procedurally-generated world. Players start out with nothing but some underwear (unless they equipped something earned from season progress before jumping in), and must immediately forage the local area for sticks, flint, and other materials in order to go back to the village and craft necessities such as tools, weapons, potions, and armor. Venturing too far from the village early on is a surefire way to get killed, but thankfully the player’s equipment and stats are summed up, and the game is quick to alert you when you run into an area you are underpowered for. The early game is a major grind of collecting and crafting to prepare, something that will no doubt turn off those looking for more action and less collecting.

Saga mode is also tough, even with many players working together. Most in-game nights, enemies called Helthings will spawn in three locations just outside of the village, and the game temporarily enters a tower defense mode of sorts. The enemies will try to break down the three gates of the village, each of which can be reinforced once enough materials are supplied. These gates are flanked on their sides by arrow towers, which have to be constructed and upgraded, again with materials collected by players, but which can provide much-needed defense when there aren’t enough players defending the village. People actually use voice chat in this game, perhaps because it is a necessity if progress is to be made. Many games end before the fifth night otherwise!

Occasionally, massive creatures known as Jotnar (Jotunn when singular) show up, and they saunter in from the edge of the map, slowly making their way towards the village. Players are supposed to kill these creatures quickly after they appear, otherwise the village will not hold out for very long. Of course, when you’re so busy gathering materials or fending off other creatures in the night, or simply struggling to survive, never mind thrive, it can feel overwhelming to have to also take on a formidable boss. Assuming the village is lost (and many will suffer this fate), then a game over screen is shown, and the Roguelike elements of Tribes of Midgard kick in. Each playthrough of the game earns experience, and various rewards are unlocked which can help players survive a little longer. Unlocking the Villager outfit helps to ensure you’re not completely defenseless upon starting a new game, for instance. Progression is shown for the currently active season, as we’ve seen with many games-as-a-service models. So if you like the slow drip style of unlocking things one at a time, Tribes of Midgard will serve you well. 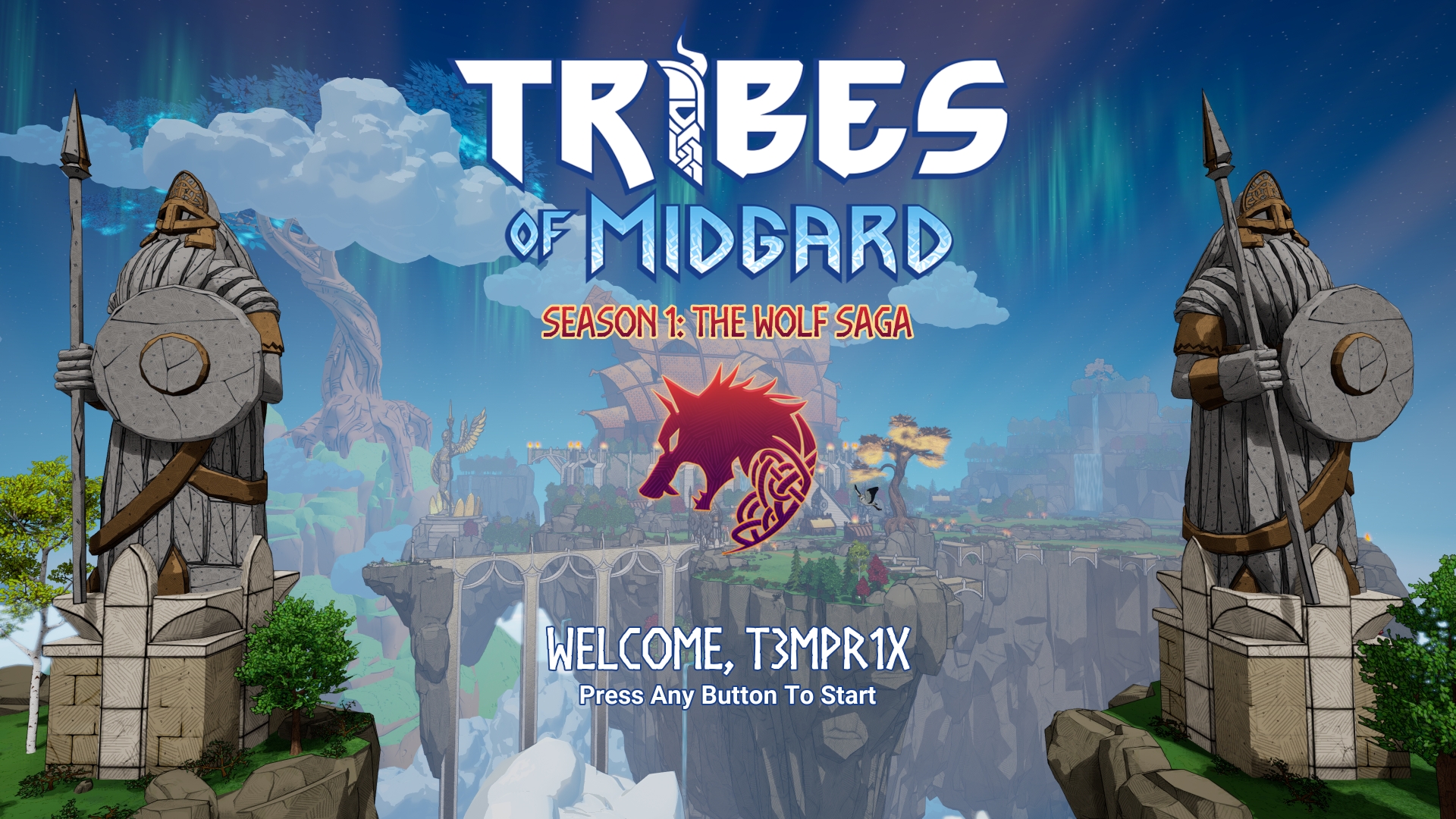 Tribes of Midgard PS5 Review – Survival of the Options

If you can manage to level up just a few times, the other more welcoming mode of Tribes of Midgard opens up. Dubbed Survival mode, it allows for solo or online play, with various options to tweak which raise or lower the difficulty of the world that you’ll spawn in. The more challenging the world, the more season XP is dished out, and vice versa. Playing a 0.3x world, for instance, won’t provide much of a challenge, but it will allow players to experience many of the game’s mechanics that they might otherwise miss out on in the punishing Saga mode. The challenge level in such a world is so low, though, that things quickly become repetitive as having a village surrounded by level three reinforced gates and six maxed-out arrow towers all but ensures any enemies that spawn at night will be destroyed without much player intervention. Still, this serves as practice for how games in the Saga mode are supposed to go.

The Unreal Engine 4 is used for Tribes of Midgard, and it performs predictably well on the PlayStation 5. The world is presented in bright pastel colors, all cel-shaded and great to look at. There aren’t any graphics options to tweak here, and levels load in within just a few seconds. Fast traveling between altars is instantaneous, except for the animation that is played as you relocate. The DualSense haptics are used for walking, with vibrations for each step taken which feel a little heavy, while the adaptive triggers are used lightly for certain weapons like the bow. Since combat mostly uses the face buttons, there’s not much other use of haptics. The built-in mic on the controller certainly helps to ensure everyone has a mic, at least.

Tribes of Midgard has its moments of awe buried in a mountain of grinding. Players who enjoy a long haul to get to sweet rewards will find a lot to love here, especially for only $19.99. Others who don’t have the time to invest in yet another survival game will probably want to look elsewhere, though unlocking the Survival mode can make things easy enough to simply enjoy the game on your own terms. Playing with friends is, as usual, the best way to experience this co-op adventure, over and over and over again.

Tribes of Midgard review code provided by the publisher. Version 1.003 reviewed on a PS5. For more information on scoring, please read our Review Policy.

Death Trash is a gutsy take on old-school RPGs, but maybe play it next year