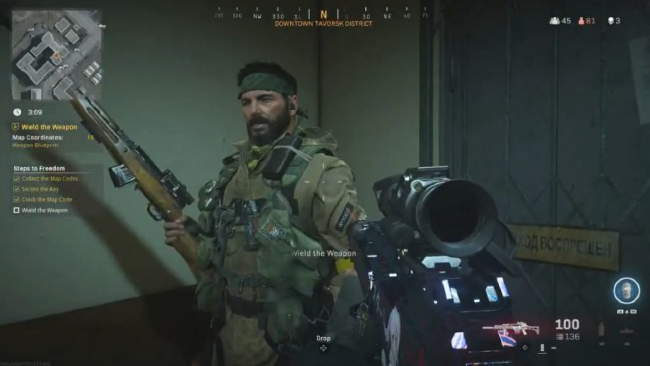 Verdansk got nuked, and we’ve been thrust back to 1984. The big Warzone map changeover happened via a live event, something that was built up to over the course of Season Two, with the seeds planted well before that. But while throwing a nuclear missile onto an entire map is a huge event, it was less engaging than Warzone live events that have come before, particularly the Black Ops Cold War reveal.

Back in August 2020, players were treated to a limited-time playlist called “Know Your History” with a series of unique objectives. Eventually this led them to meet up with Black Ops franchise character Frank Woods, who gave them a unique weapon blueprint. After this, it was a mad dash for the Stadium as audio played from the Black Ops Cold War teaser, and various images flashed up on screen. The gas rapidly closed in and air raid sirens pierced the air. It was an intense and engaging sequence of events, culminating in the full reveal for Black Ops Cold War.

“Know Your History” was the first indication that Warzone might mimic and even rival some of the biggest Fortnite events, which have ranged from movie screenings and virtual concerts within the game, to riveting map changing events that players could actively participate in. Expectations were set, particularly as big milestones like the new premium Call of Duty release and one-year anniversary of Warzone set in.

Verdansk was finally nuked on April 21, 2021. A limited-time playlist went live that saw players fighting just to survive a zombie outbreak overwhelming the map, something that had been bubbling all season. The twist? The zombies were players who had been killed. But exfiltration wasn’t possible. Verdansk and the Operators currently trapped there were already dead. The timer ticked down and… boom. Verdansk’s outbreak was handled with complete eradication. Via a cutscene. After a match of fighting to survive and respawning as zombies once players died, the destruction of Verdansk happened via cutscene.

“That was it?” was the sentiment of many in voice chat at the end of each round of “Destruction of Verdansk Part 1.” Having played it multiple times, it doesn’t matter whether you survived to the end or became a zombie, the outcome (and rewards) were the same: a simple cut to black, the nuke cutscene, and a calling card for being there. While the frantic final moments of Verdansk really communicated the dire situation well, a Fortnite event this was not. Control was wrenched from the player as they watched the biggest part of the event play out via a cutscene.

What followed was almost 24 hours of downtime while players played traditional modes on a new night version of the smaller Warzone map, Rebirth Island, the nuclear blast visible in the distance. What would come next? Verdansk was gone! What would herald in the new map? Finally players were treated to a limited-time event on Rebirth Island, fighting over control of the nuclear launch device to be the ones to put an end to Verdansk themselves. It was a chaotic Capture the Flag/King of the Hill kind of gameplay event, once again concluding with a cutscene.

This time, we watched as time rewound and Verdansk became a 1984 version of itself. Players were then immediately dropped into the new Verdansk 84 map for a small scale battle royale featuring the lobby of players from their Part 2 event. But again, Part 2 of the event played out exactly the same regardless of what you did. Whether you were one of the destroyers of Verdansk who held the nuke control at the end of the match or the many others who kept getting sniped anytime you’d even get close, the end result and rewards (none) were the same.

I understand that there are certain development limitations when making a game—and subsequently, an event—of this scope and scale, not to mention being on a fixed deadline like the launch of a new Season. And the fact that all of this limited-time event development essentially goes into the garbage when the event is over means a whole lot of working smarter, not harder in adapting existing elements rather than creating completely new disposable things for the game.

I’m not saying that the Warzone nuke event was bad by any stretch of the term. It was an exciting great way to end the current map, built up over months of escalation, which should definitely be considered as part of this event. But I would have loved to see more happen in game from the players’ perspectives, rather than via cutscenes. I would have loved to see more ways to engage with the final moments of Verdansk, apart from a thinly veiled capture the flag/king of the hill game mode to launch the nuke (which was pretty much cribbed directly from Warzone’s Exfiltration game mode).

Much of the interactive portion of the nuke event ended up being just dying repeatedly in chaotic lobbies for ten minutes while you waited for a couple of cutscenes to play. When compared to the relatively more interactive and engaging Know Your History Black Ops Cold War reveal event, which saw various objectives, the reveal of Frank Woods in the game, and that final frantic scramble for the Stadium, the nuke didn’t engage the players or reward their participation nearly as much.

Maybe they could have let players manage to exfil before the nuke, with a unique “I Escaped Verdansk and All I Got Was This Lousy Calling Card” reward for bragging rights. Maybe they could have done some in-game effects to really drive home the point that you didn’t escape the nuke and got blasted. Perhaps they could have utilized Know Your History’s mad dash for the stadium as operators tried to escape the destruction  (but ultimately failed and got vaporized anyway). These are small things, but things that would have engaged players more, nonetheless, and would have ended up being much more of an “I was there” type of moment. I was there, but I still feel like I just watched the same cutscenes as everybody else whether they played or not.

However, the biggest caveat here is that everything would have worked a whole lot better had it been more of a surprise.

Warzone’s Nuke and Map Change Were Let Down by Leaks

A big part of the letdown for the Warzone nuke event was the fact that it had leaked beforehand. Obviously designed to be a shocking surprise, multiple bits and pieces of the event had gotten out well ahead of time, and the speculation about what might happen killed any excitement or awe at the surprise. Verdansk 84 was known weeks ahead of the nuke dropping. The nuke dropping was a terribly kept secret. So having all of these secrets spilled, players were expecting a lot more out of the event gameplay itself, particularly when looking at past events like Know Your History, Haunting of Verdansk, and what Epic has been doing with Fortnite.

Still, there are numerous small seeds and details that have been planted to continue a wild and engaging story in the Call of Duty universe, including adding a number of key Black Ops elements to Verdansk 84, mysteries that should unfold over the course of not only this Season, but future seasons as well.

Interestingly, the “Know Your History” Black Ops Cold War reveal hinted at the eventual destruction of Verdansk. It had defenseless players running for safety and cover in the Stadium. And elements of the “Destruction of Verdansk” event called back to Know Your History, hinting that this destruction had happened before, and will happen again. It’s a nice little narrative mystery that adds weight to the weird side of the Call of Duty narrative, which now canonically includes zombies and time travel via the Aether. (The ship that brought the zombie plague to modern Verdansk was sucked up into the Aether in the 1980s and spit back out in modern day, creating the crisis that led to the destruction.)

Verdansk 84 is a Great Map Update

While perhaps not an inherently wholly new map as was initially speculated, Verdansk 84 is a great map update that feels fresh and new at every turn. Entirely new points of interest make many areas unrecognizable, while small modifications to existing locations completely change up the gameplay and familiarity. And with plenty of secrets and Easter eggs to come—something Warzone’s excelled at since its launch—there’s a whole renewed excitement that hasn’t been this palpable since Warzone first released last year and players started discovering the bunkers.

Expectations are always going to be high, particularly for a game with 100 million players. While the nuke event may have stumbled over the execution a bit, it was still a thrilling and exciting milestone for a game that Activision plans to support in the long term. I expect some notable adjustments to how they handle the transition to the next map in a year or so, but I’m still excited to see what’s to come throughout Season Three with the new Verdansk 84, even if we stumbled a bit on our way to get here.

Ghostrunner 2 Will Head to PlayStation 5, Xbox Series X/S, and PC Thanks to a Deal Between 505 Games and One More Level