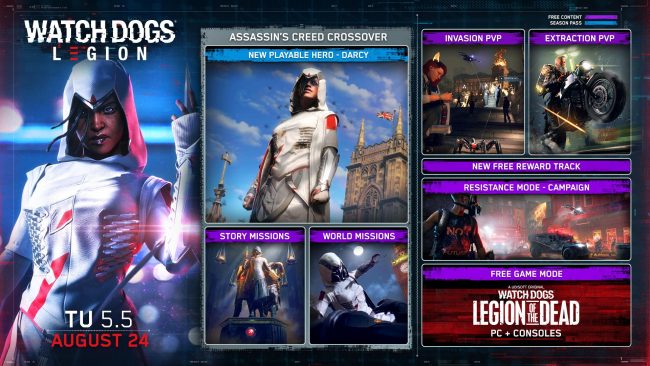 Watch Dogs: Legion‘s Season Pass included four new playable heroes. With three of those already available to players, the last of those is due to be released later this month. Assassin’s Creed‘s Darcy will arrive in the game as part of title update 5.5, which will also include plenty of free content for all players.

Darcy is not a character from any specific Assassin’s Creed game, but is a “non-canon member of the British Brotherhood of Assassins” who operate in the modern day. She was simply fun opportunity to crossover the two franchises, but Ubisoft is clear that this does not link them. This is entirely fan service.

Darcy follows in the footsteps of Mina Sidhu, Aiden Pierce, and Wrench, who all came with their own special abilities and equipment. Her abilities are yet to be detailed. While Darcy will be restricted to owners of the Season Pass, she will come with Assassin’s Creed-themed story missions and world missions that will be accessible to all. The delayed Invasion and Extraction PvP modes, originally due to be released in May, will finally make an appearance alongside a new free reward track. The standalone Legion of the Dead game mode will also come out of alpha and be made available on consoles.

The final new addition will be Resistance Mode, described as a new way to experience the single-player campaign as the city’s oppression affects players more directly. Players will be noticed more easily by Albion at active checkpoints, at close proximity to soldiers, and at Albion Tech Points. The Underground fast travel is disabled because public transport is too risky. Instead, players will be able to swap between conveniently placed operatives instead, who will appear on the map and even seek out their own missions. All enemies are Elites and will call for reinforcements quicker, and caution will need to be practiced as permadeath is always on.