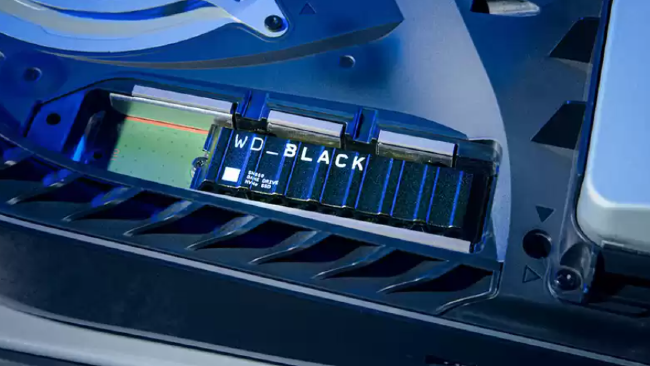 After being the PS5 SSD expansion drive of choice for PS5 architect Mark Cerny, we just had to try out the WD_BLACK SN850 NVMe SSD with heatsink for ourselves. Western Digital was happy to send us a 1TB model to throw in our PS5 and test. As expected, it performs admirably, acting as a great way to increase the rather limited onboard PS5 storage space. It meets all of the required technical specs, fits in the PS5 SSD expansion bay perfectly, and runs games on par with the internal drive and other comparable SSD expansion models.

The WD_BLACK SN850 NVMe SSD comes in three sizes—500GB, 1TB, and 2TB—and the option to go with a preinstalled heatsink or not. The PS5 requires a heatsink on SSD expansion drives, so you’ll either have to fork over the extra for the heatsink model, or grab a $15 heatsink and install it yourself.

Of note, there have been some user complaints about the WD_BLACK SN850 NVMe SSD With Heatsink that say the thermal pads do not make complete contact with the SSD itself. Multiple users have noted micrometer gaps in theirs—enough for light to shine through if looking at it straight on. We also noted a very small almost microscopic gap in ours, but after a couple weeks of testing, and running games off of it for multiple hours a day, it hasn’t presented any issues and seems to be functioning just fine. Even with the gap, the heatsink seems to be doing its job—after all, things expand with heat, which may cause the very small gap to close and make contact with the pad when the PS5 is working the SSD—but if you’re concerned about it, you may want to opt for the non-heatsink model and just install one yourself to be sure.

Installation is relatively easy, and will be the same for any drive you choose to install (with the choice of heatsink or not making the only difference in the process). Honestly, the most “difficult” part of installing a fresh SSD in the PS5’s expansion bay is popping off the PS5’s outer cover. I personally wince every time I do it, feeling like I’m going to break something in the process, but that’s just the nature of plastic covers that “snap” into place. Once under the hood, it’s as easy as removing a screw from the SSD bay cover and removing the small spacer. From there, the SSD plugs right into its connectors nicely, popping into place. Tighten it in place with the spacer screw, reattach the SSD bay cover, pop the PS5 cover back on, and you’re good to go. You can get a full video and step-by-step rundown of the installation process at this link.

Powering the PS5 back on will prompt you to format the drive. You can then transfer games over to the new SSD, select where you want new games to install, and fully enjoy the extra reserves of space on your PS5 console. The nice thing about SSDs is that what you see is what you get in terms of the memory allocation. The usable storage on a 1TB drive is 1TB. You won’t have any space reserved by the system. With traditional hard drives having 10-20% of their space eaten up for things like caching, the OS, and other technical stuff I won’t pretend to understand, it’s nice to know that whatever drive I use in my PS5 extended storage bay is giving me use of the full space, especially when that’s potentially a few more games it can hold.

The WD_BLACK SN850 NVMe SSD offers 7 GB/s read speeds and 5.3 GB/s write speeds, which meets the minimum spec for the PS5. While it’s not the fastest in the space, it doesn’t really make a difference with the PS5, which uses its own custom controller to manage the SSD anyway. So under performance testing, games load and run on the WD_BLACK SN850 NVMe SSD about the same as the internal PS5 SSD and other SSD expansions, within a reasonable and unnoticeable margin of error, usually less than one second. Rigid testing may detect these variances, but the vast majority of users are unlikely to perceive any difference in practice.

What the WD_BLACK SN850 NVMe SSD has going for it is price, coming in about $50 cheaper at each tier than some other more expensive brands, though procing on all SSDs may vary depending on the retailer. While I do have some very minor concerns about the heatsink thermal pad gap in the long term, it’s not enough of an issue for me to call it defective or subpar at this point, and may just be inherent to the design of the SN850. None of the complaints about the gap have mentioned that it caused any functional issues—most just immediately recoil at the gap before using the drive—but again, if it’s a concern, buy your own heatsink and install it rather than getting the model with a heatsink.

Overall, the WD_BLACK SN850 NVMe SSD is a great SSD expansion drive for the PS5 that will do exactly as advertised, and the nice thing about console gaming is that it’s largely plug and play with little to no variance in its functionality. The PS5 ensures it runs optimally, and it brings much needed extra storage to the PS5’s paltry internal drive. For its use as a PS5 SSD expansion, WD_BLACK SN850 NVMe SSD does the trick.

The Next Battlefield Game Might Be Some Sort of a Hero Shooter, According to New Report