Remember years ago when Hideo Kojima was first teasing Metal Gear Solid V: The Phantom Pain? He made up a fake studio called Moby Dick Studios and for months played the role of a fake developer named Joakim Mogren, announcing a game called The Phantom Pain, which of course ended up being MGSV. Any good conspiracy, however, isn’t complete without a bunch of red herrings and hoaxes from overzealous fans complicating things. Kojima did the same thing with the fake P.T. ultimately being a “playable teaser” for the canceled Silent Hills. So is it happening all over again with BLUE BOX Game Studios and “Abandoned”? Is this really Hideo Kojima and Silent Hill, or is it genuinely a studio caught in the middle of conspiracy theories from fans who will end up disappointed?

I’ve fallen down a rabbit hole of research, collecting as much information as I can to try to come to a definitive conclusion. So far, there are fewer overtly obvious clues than the entire Phantom Pain tease, but there’s enough reasonable doubt surrounding the entire project to suggest that there’s at least something fishy here.

On April 7, 2021, an article appeared on the PlayStation Blog revealing a teaser for an upcoming first-person survival horror PS5-exclusive called “Abandoned.” The post was by Hasan Kahraman, the Game Director at BLUE BOX Game Studios, and it appeared to be like any normal PS Blog post showing off a new upcoming game. These kinds of articles aren’t uncommon, and initially, not much was thought of it. In fact, the announcement video has quite a few negative comments from people criticizing everything from the shoddy sounding voice over work to the janky frame rate.

A couple months later, BLUE BOX Game Studios revealed that Abandoned would get its own PS5 app which would let players run the game’s trailers in real time on the PS5. This is a curiously specific thing that not even first-party PlayStation Studios games have done, so it raised some eyebrows that this unknown game studio would be the first to pioneer the feature.

The app was first announced for release on June 20th, but a later tweet from the studio says it will be released June 22nd. The 22nd date seems to be more accurate, being a Tuesday, when most new games and apps hit the PlayStation Store. I mean, I can also think of another game that got a console application as a teaser for an upcoming release (but was later “abandoned”…). This feels like P.T. all over again.

Why Do People Think BLUE BOX and Abandoned Are Actually Kojima and Silent Hill?

Here’s where we really dive down the rabbit hole.

This week, BLUE BOX Game Studios posted a tweet indicating that “Abandoned” wasn’t the actual name of the game, and teasing a game name starting with “S” and ending with “L”.

Theories had already been circulating that BLUE BOX was another Kojima ruse and that “Abandoned” was in fact the next Silent Hill, and of course this random tweet exacerbated that speculation to nuclear levels. The studio quickly apologized and walked things back after the tweet picked up pace, saying it had not intended to make people think it was Silent Hill.

We wanted to set things straight. We have no relations with Konami. Silent Hill is owned by Konami. We do not have any relations with Hideo Kojima. It was never our intention to tease the name as Silent Hill. We sincerely apologize for this.

They’ve been replying to assorted people with a fervor never before seen on Twitter trying to walk back this blatant Silent Hill tease. Of course, that’s only created the Streisand effect of making even more people take notice, not to mention revealing some rather curious details about “Abandoned.”

In one tweet, they refer to “Abandoned” in quotes, implying once again that it isn’t the real name of the game. (they do confirm in yet another tweet that Abandoned is a codename for development.) In another, they claim that the April teaser was just an announcement of development and that “the game itself has never been shown,” which creates some questions around what those screenshots and video in the PlayStation Blog post were then.

We are confident with the game as it is right now. The teaser back in april was just an announcement of the development. The game itself has never been shown. So We hope that we will still convince everyone with the first time reveal.

Curiouser and curiouser. Down the rabbit hole we go.

Let’s start with the logo for BLUE BOX Game Studios, which is just the PlayStation Studios logo, font and all. 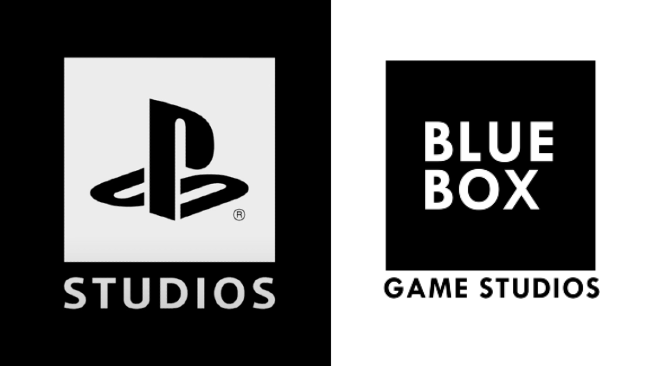 And wouldn’t you know it, the animated PS Studios logo that plays ahead of first-party games glows blue for a moment, creating a… blue box. Not to mention, PS4 and PS5 physical games all come in a…blue box. Hmmmm. And why “Studios” plural for this small developer?

There’s also the fact that BLUE BOX Game Studios only seems to have a single employee, Hasan Kahraman, who coincidentally (or not) shares his initials with Hideo Kojima. And despite saying that they’ve worked as a support studio for years, you won’t find any record of the games they’ve supposedly assisted with in the past or other developers talking about working on “Abandoned.”

The only previous game connected with BLUE BOX is a Steam early access title called The Haunting: Blood Water Curse, a game that is inspired by Fatal Frame, a classic Japanese horror franchise. I’m sensing a pattern here. That game has since been pushed to CREATEQ Interactive, another company with almost no online footprint at all. BLUE BOX Game Studios had a game called The Whisperer for Android, which now can’t be found. It has a black handprint as its icon, very similar to iconography found within Death Stranding. The game curiously only had 5 total downloads ever. They also have another game titled “Tales of the Six Swords (Early Access) for Android” which also now can’t be found and has only ever had 5 downloads as well. Seems like its just building up a fake profile for the company to stand up under (very light) scrutiny.

Okay, now I’m going to blow your mind. Hasan Kahraman does have an Apple App Store profile with a bunch of low-quality asset flip games under his belt. The only app that’s not a game is called “Go Fit XL,” which sits under the Health and Fitness category. The description of this app says at one point “Personal Training ( PT ) Programs.” Godammit Kojima. That just can’t be a coincidence, can it?

BLUE BOX Game Studios’ website is a barebones affair, with nothing to show off, no way to apply to work at the company, and zero other information outside of links to their social channels which share a similar lack of information. The BLUE BOX Game Studios Twitter account is “@BBGameStudios,” which curiously shares the BB acronym with Kojima’s Death Stranding baby. C’mon Kojima, you’re making this too easy.

Supposedly based in the Netherlands, BLUE BOX Game Studios appears to have been founded in 2015, exactly one year after the release of P.T., and right around the time Kojima was going through his breakup with Konami. Is this all just part of a long con? Well some of the tweets from BLUE BOX have been sent at very odd hours for Netherlands time, but they do line up with the Tokyo workday pretty well.

BLUE BOX Game Studios sole known developer, Hasan Kahraman, has a barebones LinkedIn profile, with almost no connections, and no further information other than purporting that he’s been at the company since April 2014.

Let’s take it a step further. The BLUE BOX Game Studios YouTube account, formed on January 20, 2015, has zero videos, and the profile header background features an image of hills with some low lying clouds and fog nestled among them. Of course, Silent Hill is renowned for its fog, and the “hills” seem like a painfully obvious tease here.

Our sister site GameRevolution proposes the idea that denying affiliation with Kojima and Silent Hill is clever misdirection, because if BLUE BOX Game Studios is a fake studio that doesn’t actually exist, then they can’t actually be affiliated with anything, so they aren’t exactly lying. 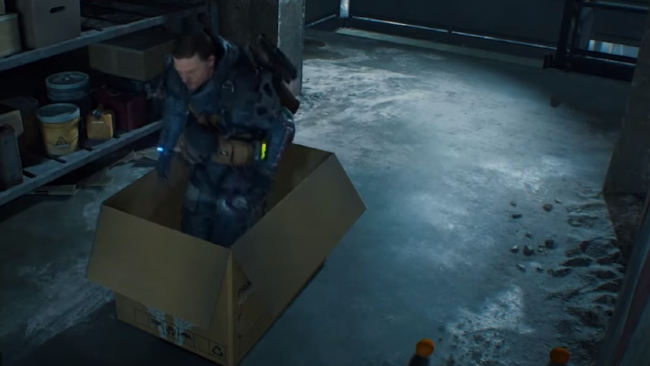 It’s also been noticed that the teaser for Death Stranding Director’s Cut from Summer Game Fest shows Sam Bridges wearing a blue suit, getting into a box, and throwing the camera a cheeky smirk. At the time it just seemed to be a Metal Gear Solid tease, but it could also play into that “blue box” reference. People have also noticed the flag on Sam’s back in this teaser is the Netherlands flag, where BLUE BOX Game Studios is supposedly based. Is it a stretch? Certainly, but this is (potentially) Hideo Kojima we’re talking about, and the nuanced marketing teasers are just as complicated and involved as his games.

There are a bunch of other potential references, including an image that Hideo Kojima shared on Instagram of Joy Division album art that matches up pretty well with the trees and forests seen in the “Abandoned” screenshots and trailer (that are supposedly of a game that “itself has never been shown”…), if you really want to get deep into the conspiracy theories and go full crazy.

The one thing that shoots all of this down is Silent Hill being owned by Konami, and at this point us not having any public knowledge on the IP changing hands at all. However, secrets of this nature have been kept before. Sony managed to keep Bluepoint’s Demons Souls remake under wraps (despite rampant speculation), and Kojima himself has been known to go to insane lengths for these kinds of teases. Konami largely hasn’t been doing much with its catalog of gaming IP, so it wouldn’t be surprising to learn that they licensed out development to external studios. In this case, a partnership with PlayStation Stu- ahem, excuse me, “BLUE BOX Game Studios” and Hideo Koji- cough, sorry, “Hasan Kahraman” wouldn’t be too far outside the realm of possibility.

The fact is that there is something fishy going on here. It’s very clear that BLUE BOX Game Studios is not who they claim to be, and that the game this shell of a company is working on is not just another survival horror game. This Tuesday, June 22nd, will either unveil the secrets within, or add more to the mystery as the elusive “BLUE BOX Game Studios” releases its “Abandoned” PS5 application to showcase the  game running in realtime on the console.

What do you think? Is this all a Kojima ruse leading to Silent Hill? Or did I just write a whole pile of crazy? Add your own crazy in the comments below as we continue to speculate on what it all means.

The post What’s Going On With BLUE BOX Game Studios and ‘Abandoned’? Is it Really Kojima and Silent Hill? appeared first on PlayStation LifeStyle.

Report: Sony Will Continue to Use OLED Screens for PSVR2 Despite Other Manufacturers Changing to LCD Screens